Sitting in front of the television when I was just a young child, my mother would often say, “Go outside and get some fresh air!”

I don’t know if Mom really knew the implications of her directive. Maybe she just didn’t want me underfoot, but as is so often the case with mother’s advice, she was right!

Probably the most widespread problem with indoor air quality in the home and in commercial buildings is a lack of sufficient outside air.

Mechanically ventilated commercial buildings are required by law, in most if not all states, to provide a certain amount of outside air. Often, in spite of these regulations, HVAC systems are not properly maintained or outside air dampers are closed or covered in a misguided attempt to save money on heating and cooling costs. Such violations of state regulations, whether intentional or not, are seldom well enforced by state authorities. As many commercial establishments are now finding, the best enforcement is provided by threats of lawsuits for personal injury resulting from exposure to indoor contaminants.

There are generally no state-mandated guidelines or standards for residential buildings, certainly not in the State of California. At home, you are just expected to open windows.

It has been my experience that many people don’t think about opening windows at home. If it gets too warm, you switch on your central air conditioning. If it’s too cool, on goes the central heat. Opening windows, under those circumstances, would be wasteful, wouldn’t it? Well, it would certainly increase your heating and cooling costs, but you could also be decreasing your chances of becoming ill. In any case, considering the busy pace of most people these days, remembering and taking the time to open and close windows may be a bit much to ask. There is also the problem of leaving windows open at the wrong time, which can invite burglary or water intrusion. 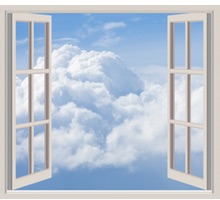 In the “old days” prior to the very tightly built houses of today, residential buildings tended to be drafty and generally less comfortable. With the construction of tighter buildings as well as increased effectiveness of insulation, caulking, weather stripping and generally sealing of houses against the elements, houses have become much cozier. It has also become more and more difficult for houses to “breathe,” that is, to replace the air inside the house with outside air. Thus the occupants of the house can develop problems with their breathing, too.

Have we, to some degree, sacrificed our health in the name of comfort and energy conservation?

I would submit that we have.
Some of these contaminants are volatile organic compounds (VOCs) or other chemical gases. Virtually all man-made materials are held together, colored, painted, laminated, covered, polished or managed by or with materials containing a variety of mostly organic chemicals. These chemicals “off-gas” continually. Major portions of the chemicals are dispersed within the first few weeks after the material is put into place. Odors of new carpet, new paint and “that new-car smell” are all the result of the VOCs off-gassing. That unpleasant odor you experience when you open up a room that has been closed for some time is the result of a build-up of contaminants, many of which are VOCs.

By observation, I have concluded that a wide variety of symptoms and illnesses can be contributed to by a lack of outside air. Among these are chemical sensitivity, headaches, nausea, allergies, and respiratory distress. Add to these the phenomenon of passing illnesses from one family member or occupant to another and you have a wide variety of illnesses that the introduction of sufficient outside air can help to eliminate or reduce.

It is true that “the dose makes the poison.” There are airborne contaminants all around us. Our immune systems are equipped to handle a myriad of potentially harmful materials that are present in our environment. This includes naturally present bacteria, fungal spores, viruses as well as chemical toxins that may occur naturally or are injected into man-made materials in our less than the natural environment.

Allergies, of course, are a little different. Somehow the immune system identifies a relatively harmless substance as something harmful. The immune system’s “over reaction” to these allergens tends to produce symptoms, usually in the form of respiratory distress and/or skin irritation.

What can you do about it?

In a residential setting, dealing with a problem of insufficient outside air may be as simple as opening windows. Windows need to be opened in strategic locations so there is a flow of air through the house. So to handle the problem of a lack of fresh air is to simply provide more fresh air. However, in the dead of winter or the heat of summer, it may be difficult to justify bringing in all that expensive hot or cold air. I suppose if someone else is paying your medical bills, which is becoming more and more the case with the socialization of medicine, that may be a valid justification, but just how much is your health worth to you?

Okay, so now you have to have windows opened anytime you are in the house, often bringing in that uncomfortable air from the outside. And you also have to remember to close the windows when you leave the house and when it starts to rain. Does this seem like too much of a hassle to you? Is there a simpler way? 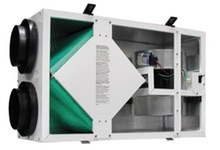 I suggest getting with an HVAC (Heating, Ventilation and Air Conditioning) contractor and having an outside air inlet installed on your HVAC system. This is as simple as installing a duct to draw air from the outside into the return plenum (the box where the air is returned from the house to be re-circulated by the HVAC system). Make very sure that the outside air is drawn from a location with no apparent pollutants. Such as, you wouldn’t want the inlet drawing air from above an area where you routinely warm up your car. As possible, based upon your own cost/benefit calculation, have the fan on your system running at all times the house is occupied. The outside air should be filtered with a minimum of a two-inch pleated filter. In this manner, the outside air being introduced to the house is cleaner, with fewer pollutants than outside air introduced through open windows and doors.

In less temperate locations than much of California, there does exist a less costly method of introducing outside air. Providing outside air can bypass or supplement the HVAC system to reduce or eliminate the possibility of overloading it or vastly increasing energy consumption. Heat recovery ventilators (HRV) are designed to bring in air from the outside while cooling or heating the air being introduced by recovering the energy (heat transfer) from the air being exhausted simultaneously with the outside air being ushered in. The heat exchange is designed to take place in either direction depending on the relative temperature difference between outdoor and indoor air. HRVs can be installed in or in conjunction with the HVAC system. After the initial start-up investment, the cost of providing outside air would be considerably reduced.

Breathe better by bringing sufficient air change to your home.