Dust mites are ugly little arachnids (eight-legged creatures related to spiders). They are microscopic, but you might see one against a black background. They are quite repugnant little monsters when viewed under a microscope.

It has been reported that more people are allergic to dust mite allergens than any other single item. The allergens aren’t just live dust mites, they are dead dust mites, dust mite parts, and feces. The feces particles are particularly allergenic. Gross, huh? 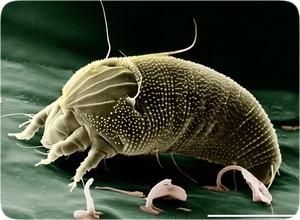 Dust mites live on dander or sloughed off the skin from humans or animals. They also eat some molds. Dust mites tend to be abundant in crowded and humid environments. The crowd provides the food and humidity provides the water. They find plenty of hiding places in fleecy material. Dust mites cannot live in dry climates and will die off when humidity falls below 40%. But even after they die the problem persists until the body parts and droppings are removed.

Bedrooms are especially favorable habitats for dust mites. Food supplies are generally plentiful. Most people spend an average of eight hours in a horizontal position and thus rub off a relatively large amount of skin. Mattresses, bedclothes, carpets and other fleecy materials can become infested. Even if the humidity is generally low, some dust mites might obtain sufficient moisture from humidity generated by exhaling and from sweat.

Dust mites don’t bite and are not known to cause any diseases. The harm is to individuals who have developed allergies to them. As the concentration of the allergen increases, the allergic reaction becomes more intense.

Symptoms include runny or itchy nose, congestion, sinusitis, irritated eyes, cough, itchy skin, trouble sleeping. Asthmatics could suffer other symptoms including breathing difficulty/shortness of breath, chest tightness or pain, severe asthma attacks. Symptoms are likely to be worse in locations where dust mites are present, thus usually in the home.

What can you do about it?

The most successful method of relieving dust mite allergies is an avoidance of the allergens. The other conventional methods of relief include prescription medication and allergy shots. I would add another method, which could technically be included under avoidance. Exhausting moisture-laden air such as from bathrooms and kitchens is good preventive maintenance to avoid dust mite infestation.

Other methods of reducing exposure to dust mite allergens include:

I was inspecting a home that had been subjected to numerous rain leaks. Mold growth was suspected in the walls in several locations. The increasing respiratory and other symptoms of the homeowner prompted our investigation. He had lived alone in the house for a number of years. Business trips he took that lasted several days and his symptoms subsided only to return once he came back home.

The inspection and testing included taking samples for airborne mold spores in the ambient air as well as inside walls in certain locations. We did find evidence of mold growth in some of the locations, particularly on the lowest floor of this four-level hillside home.

Even though our investigation was primarily geared to mold problems, I noticed something else that might be causing a problem for the homeowner. The head of his bed was located against the wall right next to the door of the large master bathroom. The door was wide open and the only exhaust fan was one in the small adjoining room that housed the toilet. I saw rust on the metal cover for a stereo speaker built into the bathroom ceiling plus faint watermarks apparently due to condensation running down the walls outside of the shower.

For this reason, I decided to take a sample from the bedding and carpet in the master bedroom for dust mite allergens. We found substantial mold growth sites in some walls as suspected, but we also detected the highest levels of dust mite allergens of any location in my years working in this field. If we had only dealt with the mold problem and not seen the potential for dust mite allergens, the homeowner’s symptoms might not have been relieved even with complete and proper mold abatement.