Under normal conditions, Chaetomium is found in soil, on cellulose materials, including woody and straw components and animal waste.

The shape of Chaetomium spores makes it relatively easy to distinguish from other mold spores. Spores tend to be shaped like a football or lemon.

While Chaetomium has not been studied as well as many of the better-known molds, it is known to be an allergen that can cause hay fever and asthma.

Industrial uses include participation in textile testing and production of cellulose, which is an enzyme that breaks down cellulose into simple sugars. 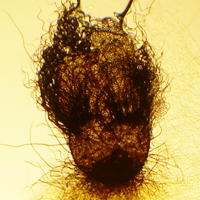 While certain individuals can develop allergies to virtually any mold, allergies to Chaetomium are not well studied. There are indications of exposure to Chaetomium causing or leading to a number of infections and/or to set up a predisposition to some major diseases.

My limited research of Chaetomium indicates there is controversy as to its potential health effects. Some literature shows only very limited pathogenic potential. Only mentioned is as an uncommon agent of nail infection. Other literature has linked Chaetomium exposure to fatal deep mycosis, brain abscess, and peritonitis, which is an infection of the peritoneum. The peritoneum is a membrane that lines the inner abdominal wall and covers the organs in the abdomen. Cutaneous (skin) lesions may also develop due to Chaetomium exposure.

Exposure to Chaetomium has also been linked to a predisposition to damage to the myelin sheath resulting in a higher incidence of Multiple Sclerosis, Lupus and certain forms of Cancer; incidents of DNA damage and inhibition of cell replication.

Chaetomium species produce a number of toxins as well as other compounds that might be better described as mutagens, due to possible DNA damage