Aureobasidium is a very common mold type worldwide. It is ubiquitous with about 15 known species.

Aureobasidium is found under normal condition in soil, fruit, estuary sediments, wood and the portion of plants above the ground.

Indoors Aureobasidium often grows in locations containing a lot of moisture like bathrooms and kitchens. That black mold you might see on shower tiles or curtains is often Aureobasidium. Window sills and textiles are also favorite haunts.

It is a wet spore that can be disseminated by water droplets, but also by wind when it is dried out.

This is a yeast-like fungus. Early on it is cream color to pink, but grows much darker with age. 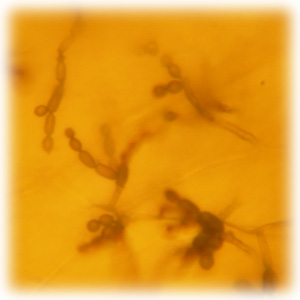 Industrially, Aureobasidium pullulans produce pullulan, which is used for the packaging of food and drugs. This material is processed into rayon like fibers that are glossy and with nylon strength.

Some of the more familiar health effects related to Aureobasidium include asthma, hay fever and hypersensitivity pneumonitis (an allergic reaction to breathing in some substances that cause inflammation of the lungs). Some allergies have names that are specific to certain activities. A couple of these are: Humidifier fever and Sauna taker’s lung.

There is nothing known of toxins produced by Aureobasidium.

Rare instances of infection have been reported of skin wounds and eye inflammation. It has been found in the blood and other organs in some patients. 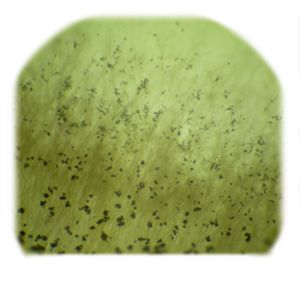 What can be done about it?

The most effective way to deal with this mold is to be aware primarily of locations where moisture is prevalent. Bathrooms especially tend to be likely mold locations. If you have an exhaust fan in the bathroom or shower area, it should be allowed to continue running for an hour or so following showers or baths. Timely drying of this moisture will discourage mold growth. Moisture in the kitchen can also be dissipated using the oven exhaust, which is most often used to rid the kitchen of cooking odors.

This mold type is most often found on bathroom walls and should simply be washed off whenever it is observed. Clean-up solution recommended is 10% bleach with a small amount of non-ammoniated detergent added to cut surface tension. The area should remain wet for 15 minutes, then rinsed and allowed to dry.

Once exposed and suffering health effects, steroids and/or anti-fungal drugs including statins are often prescribed. Side effects of these drugs, including suppression of the immune system, can be quite troublesome. These drugs can be very toxic, especially to the liver.

Natural remedies include probiotics that can actually enhance the immune system. Some spices are known to be anti-fungal. These include garlic, ginger, cayenne, and goldenseal. Starving the fungi by avoiding certain foods is also recommended. Anti-fungal diets are found in some publications such as Breathe Free or Die – The Layman’s Guide to Mold and Other Indoor Air Quality Problems, by Stephen Huff or The Fungus Link, by Doug A. Kaufmann.

Always consult one or more health care professionals before beginning any health remedy.