In microscopic analysis, Aspergillus is often grouped with Penicillium. That grouping is generally shown as Penicillium/Aspergillus or Pen/Asp. The reason for this grouping is that the two spore types cannot be distinguished one from the other microscopically. To differentiate the two requires seeing the underlying structure which often means culturing (or growing) the organism.

Indoors Aspergillus will grow on a wide variety of materials (substrates) including building materials, leather, and clothing depending on the amount of moisture present. Aspergillus is often detected inside air conditioning systems especially on cooling coils and/or interior fiberglass liner. On building materials Aspergillus is one of the first or primary invaders along with Penicillium. Both can produce toxins for the purpose of discouraging other molds invading space they have already claimed. It is speculated that some of these toxins could be harmful to humans, but this has never been clinically established. The primary invaders can be joined by a secondary invader, usually Cladosporium. With a continuation of high levels of moisture, they can be overgrown by Stachybotrys or possibly Chaetomium. 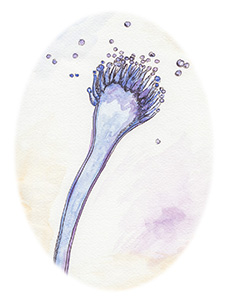 While certain individuals can develop allergies to virtually any mold, research shows that Aspergillus species are known to cause a number of specific allergies. Some of the more familiar health effects related to Aspergillus include asthma and hay fever. Some allergies have names that are specific to certain professions or activities. Some of these are: Malt worker’s lung, Compost lung, Wood trimmers disease, Straw hypersensitivity, Farmer’s lung, Oat grain hypersensitivity. The list is probably longer, but this should suffice as an introduction. 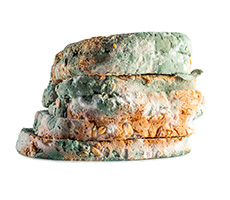 Some species of this mold type are quite important due to their ability to grow well at human body temperature. All three of the ones I’m about to list can invade the body, grow wherever they manage to find a favorable environment and do damage there.

Aspergillus fumigatus will grow in the lungs resulting in fungus ball or Aspergillosis. One of the evident symptoms is coughing up blood.

It should be noted that for the most part, these are “opportunistic pathogens,” meaning those with impaired immune systems are most vulnerable. These Aspergillus species can be quite problematic in hospitals and other health care centers due to the susceptibility of patients.

While Stachybotrys, AKA “The Black Mold,” gets much of the publicity and is deservedly notorious, Aspergillus could be an even more important mold type due to its broader abilities to do harm. Stachybotrys will be discussed in a future article.

What can be done about it?

Once exposed and suffering health effects, steroids and/or anti-fungal drugs including statins are often prescribed. Side effects of these drugs, including suppression of the immune system, can be quite troublesome. These drugs can be very toxic, especially to the liver.

Natural remedies include probiotics that can actually enhance the immune system. Some spices are known to be anti-fungal. These include garlic, ginger, cayenne and goldenseal. Starving the fungi by avoiding certain foods is also recommended. Anti-fungal diets are found in some publications such as Breathe Free or Die – The Layman’s Guide to Mold and Other Indoor Air Quality Problems, by Stephen Huff or The Fungus Link, by Doug A. Kaufmann.

Always consult one or more health care professionals before beginning any health remedy.