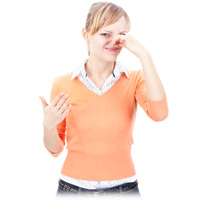 These are all common descriptions of unpleasant odors that most people find disturbing or distracting.

People affected seldom care about the source or cause of the odor; they just want it to go away. Not many firms actually specialize in investigating odor problems. There are no “magic sniffers” that can either determine the constituents, the source or the cause of an odor. It appears to be the case that the best tool still in tracking down an odor is the trained and sensitive nose. Add to this tool a thorough knowledge of a wide variety of odor causes plus factors and driving forces affecting air pathways. With this specialized knowledge and the common tool (nose) along with chemical smoke tubes, the causes and sources of odor problems can be located and guidance can be provided on steps to take to eliminate them. The purpose of the chemical smoke is to determine pressure relationships when the odor is present for the purpose of tracking it back to its source. 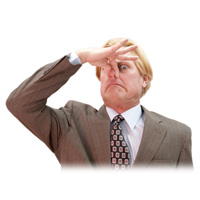 The odor investigator’s job is to determine why the odor is in the location where people are complaining, where it comes from and how to eliminate it. Often the odor is intermittent; it comes and goes. Changing pressure relationships within a building can cause air to flow from unoccupied regions where unpleasant odors are expected into occupied spaces where they are not supposed to be. These unoccupied regions can be such areas as attics, basements, wall interiors, and other cavities. Occupied locations where odors might be expected can also become offending odor sources when these odors are not properly contained or exhausted.

These areas include restrooms, kitchens and break rooms. Work areas that produce odors as a matter, of course, must also be properly contained or exhausted so as not to let odors migrate to areas where they don’t belong. The most effective way we know of solving intermittent odor problems is to investigate the problem when the odor is present in areas where it is in not expected or wanted. Once the odor has been positively identified and is present, locating the source consists of generally just following it back to the source.

Often even locating the source for an odor when it is present is not necessarily a simple process. In one case personnel in one office building complained of an intermittent sewer odor that occurred in several building locations. Part of the problem with locating the source was that the ventilation systems were fan/coil units located above the ceiling. This was an open ceiling return so the air above the ceiling was shared by numerous fan/coil units. Using ladders to access above the ceiling we were finally able to trace the odor back to its source partially by finding the general area where the odor appeared to be strongest.

But even this tracing of the odor was not sufficient to locate the source quickly. One piece of information enabled us to find the offending location more quickly. Speaking with one of the management personnel we discovered that the odor had been present to some degree ever since the company had occupied the building. It was also stated that the build-out prior to occupation was done quickly due to a tight deadline. We also learned that some restrooms had been moved and offices put in their place. With that information, we were able to locate a sewer vent pipe inside a wall that had not been capped when the restroom was moved. Once that was found and the pipe properly capped, the odor problem was solved. 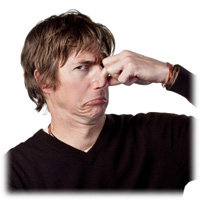 The most difficult assignment for an investigator is to determine the source of an odor that is not there at the time of the investigation and where no positive identification has been made. There have been times when we have been able to find an odor source without the smell being present. An accurate description of the odor plus the conditions surrounding the times the odor has been present is sometimes sufficient to locate the source. One problem with locating odors using this method is that odors are sometimes subjective and difficult to describe. This is essentially using a theory system for determining the odor source. This system is often difficult and time-consuming. It requires experience in detecting odor sources as well as knowledge of air pathways in buildings. It may require having personnel on site keeping a log of when the odor is present in particular locations and the duration. Such logs can enable an investigator to trace to the source by determining where it first occurs and to what locations it travels.

While difficult to locate the source of an odor by the theory method, sometimes general knowledge coupled with a bit of intuition can produce dramatic results. Such was the case with a company that produced precision electronic products in clean rooms. Over a period of months at various times, some of the clean rooms had to be evacuated due to a very unpleasant odor whose source could not be identified. The company had spent thousands on various professionals attempting to locate the odor source, to no avail. Having heard that our company specialized in odor investigations, we were called in to solve the problem. The principals of the company concerned did not have a lot of confidence in our being able to solve the problem after all the other failures.

According to the information provided, we suspected that the source of the odor was related to the HVAC system serving the area. It was a big package unit with the main supply duct so large we could stand up in it. We noticed that the unit was equipped with a humidifier that was used primarily to keep the incidence of static electricity low. We had the humidifier activated as an experiment. After the humidifier came on we left the HVAC system in order to observe any effect in one of the clean rooms. Before we could get to our destination, the clean room was already being evacuated due to the odor. Upon questioning, we discovered that the humidifiers were provided with water from a large water storage container. Further questioning revealed that the anti-scaling chemicals used in the storage container had been changed to another brand just prior to the odor complaints. Once the chemicals were changed back to those previously used, the odor problem disappeared.

After the company spending thousands of dollars attempting to solve the problem in addition to many man hours of lost production, we had discovered the source of the odor in less than an hour. We were the heroes of the day. Knowledge and intuition are great tools, but being lucky enough to find it with the first action taken makes you look like miracle workers. 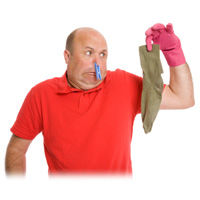 There is a common odor phenomenon that occurs due to microbially contaminated cooling coils in an air conditioning system. This odor situation reportedly is most prevalent with heat pump systems. This is usually bacterial and sometimes fungal contamination resulting in an odor situation known as “Dirty Socks Syndrome.” It may actually be intermittent in that it is only noticeable when the coil becomes wet enough to activate the bacteria. The odor is generally described as smelling like a gym locker or dirty socks, hence the name of this phenomenon. Swab sampling of the coil can confirm the condition with bacterial analysis. High bacterial levels usually signal that you have found the source of the odor. The solution to “Dirty Socks” is to pressure wash the coil thereby removing all the nutrients supporting microbial growth and then sanitizing the coil to kill the microbes.

Sewer odors are quite common complaints. Broken or cracked sewer vent pipes inside walls or above ceilings can result in intermittent sewer odors that can be very frustrating in trying to locate the source. Most common is having sewer odors pulled into the HVAC system through the outside air (OSA) inlet. This is usually a design problem whereby sewer vent pipes exit too close (within 15 feet or so) of the outside air inlet of the HVAC system. Sometimes even with vent pipes far away from the OSA inlet, sewer odors can still be pulled into the indoor air via the air conditioning system with certain wind speeds and direction. If the vent pipe is upwind and/or lower on the roof than the outside air inlet, the odor can be carried across the roof to be picked up at the OSA inlet. It is often necessary to use PVC pipe to extend the vent pipe outlet to six feet or so above the roofline enabling the odor to be dissipated by the wind.

Insufficient HVAC outside air can exacerbate virtually any odor generated indoors allowing it to build up with too little outside air to dilute it. Conversely, sufficient outside air can mitigate such odors. This rule, of course, assumes that the source of the odor is indeed inside and not being provided by the HVAC system via microbially contaminated coils or through the OSA inlet. We have known cases where outside air inlets were closed off to eliminate odors from outdoors. Much of the time they are closed off due to sewer odors being pulled into the system or because of odors generated by re-roofing nearby. Certainly, there may be valid reasons for closing off outside air inlets for short periods of time due to acute periods of outdoor odors, but failure to supply sufficient outside air on any continuous basis is just asking for odor and potential health problems down the line.

In summary, odor investigations can be quite difficult even for professionals. The first step is to identify the odor as nearly as possible. Try to relate it to something you have experienced before so you have a method of describing it. Keep in mind that odors do tend to change a bit as they move farther and farther from the source. An odor that originates on the first floor of a building may still be unpleasant but substantially different by the time it reaches the third floor.

If you are unable to locate the source yourself, there are people you can call to assist, such as plumbers or HVAC contractors. Companies that specialize in odor problems are relatively rare, but if you find one with knowledgeable and experienced investigators, it is often the most cost effective to contact them first so the odors can be quickly eliminated and personnel can get back to production without the distraction of unpleasant odors competing for their attention.