A common source of occupant complaints!

Last month we discussed the economic and functional reasons to keep the coils clean – the dirtier the coils are, the harder the machinery works to get the job done, leading to higher energy costs and equipment failure.

Should one be concerned with health implications resulting from dirty coils? In a word, Yes! 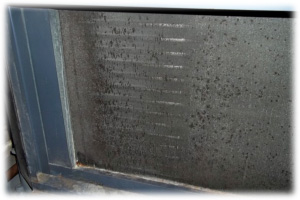 Dirt plus moisture will always lead to microbial or fungal growth of some sort. It is inevitable. A properly functioning cooling coil will produce condensation which then runs off and drains away. In a sense, they are rinsing the coil surfaces, but gradually over time dirt and debris does build up providing a rich nutrient base in which mold and bacteria can thrive. And the more there is, the greater the growth. It’s almost geometric in its progression.

So what grows in a coil? And how bad can it get?

This coil has a smattering of mold growth on the surface. The coil is in good structural condition and perfectly functional. But allowed to continue, the growth will hinder air flow, begin to erode the coil fins and lead to all kinds of other ills. 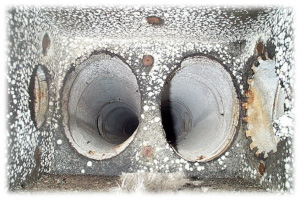 Any form of fungal growth such as mold requires a source of food and in an air conditioning environment that “food” is provided by the dirt that builds up within the system.

The types of mold most commonly found growing on coils are Cladosporium and Penicillium/Aspergillus. While these strains of mold are common in normal environments, they are also known to be allergenic for some individuals.

Penicillium and Aspergillus can both produce toxins that could be harmful to humans. It should be noted that mold toxins have not been clinically shown to be harmful to humans by inhalation, however, some species of Aspergillus, in particular, can grow at human body temperature so are potentially pathogenic. Lung infections known as Aspergillosis can cause numerous different symptoms.

When coils become clogged with dirt, debris and mold growth, the fan will still attempt to move its usual volume of air through the coils and the velocity of the air flow will be considerably faster in those areas of the coil that are not clogged. This fast-moving air pulls water off the coil blowing it downstream. This will often saturate the fiberglass liner and fostering mold (usually Cladosporium) growth. Mold this far downstream has a greater possibility of invading the occupied areas of the building served by the air conditioning system. 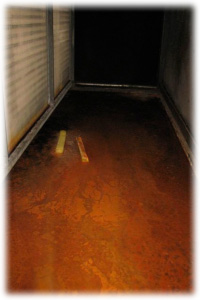 Bacterial growth, as opposed to fungal growth, can make its own food in order to survive. It is most commonly found in the standing water in a condensate pan or at the base of the coil. The more offensive odors coming from a system tend to be from the bacteria or “slime” that builds up in a condensate pan.

The bacterial growth on the coils or in the pan does not generally pose a health hazard unless ingested or if there is considerable prolonged exposure. But along with the particulate material that accumulates, bacterial growth can form into a slimy mass that can clog the drain line resulting in overflow, stagnant standing water and prematurely rusted out equipment. 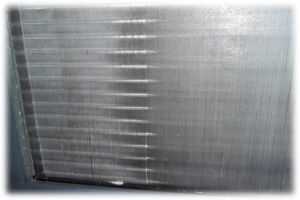 The answer is to ensure it stays clean! If there is a question about fungal or microbial growth, it is always prudent to have it tested and have it cleaned to guarantee the longevity and health of both your system and your tenants!