The coils in an HVAC system need to be cleaned - everyone knows that it only makes sense. 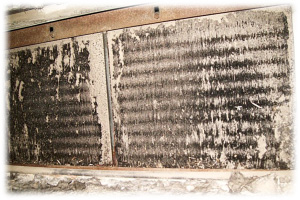 But how many people really know that dirty, corroded or plugged coils have a more negative effect on energy costs and air quality than any other component of an A/C system? Not as many as you would think. Maybe if someone saw the coil, they would insist they be cleaned, but the coils are inside the cabinet out of sight and the thought is “the system still cools, so if it isn’t broken, don’t fix it.” It could easily be argued that neglect of the evaporative or chilled water coils is the number one culprit in excessive energy use in homes and commercial buildings.

The coil to the right will still cool the air as it passes through the coil, but at what cost?

A coil is a series of dozens of aluminum fins cooled (or heated) by copper tubing running through them. Proper operation depends on efficient heat exchange and that depends on bare, clean metal. This coil is matted over and the fins are coated with grime and bacterial growth.

And while it may “cool” the air, the equipment has to work much harder to get the job done, costing a great deal more in energy, not to mention the additional strain on the machinery or the potential health effects. 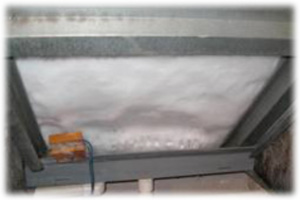 Several conditions including an accumulation of dirt and debris can lead to a coil “icing over” in which case no air passes through, but of course, the equipment doesn’t know that and will labor endlessly trying to do its job often leading to equipment failure. 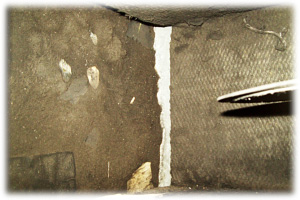 This can get extreme. The in-line coil shown here is completely matted over with fiberglass which had come loose further upstream. (Yes, there is indeed a coil beneath that carpet of fiberglass!) The money wasted trying to overcome this situation would be hard to calculate, but it went on for years before the building owner addressed it. This particular building had over 50 reheat coils all in similar condition! 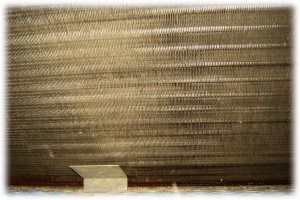 Even a set of coils that are simply discolored leads to higher operational costs. A light coating of dust or debris will reduce the heat exchange causing the machinery to work harder, thus costing more.

The things wrong with coils can be broken down into a few areas:

Many ills can result from coils that are in need of cleaning: 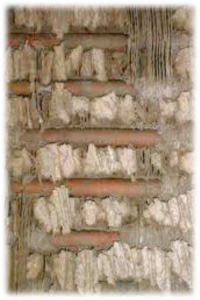 These fins on these badly deteriorated coils have reached a point where they are beyond salvaging. The coils had become so impacted with dirt, debris and rotted fins that the only choice is a replacement. But even a case like this enough air could be passing through that the occupants may think it is still working. 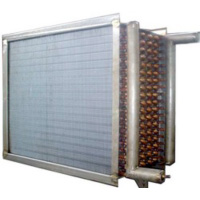 A large commercial chilled water cooling coil such as these can be as thick as 18” meaning dirt can get lodged deep into the coil. If not cleaned on a regular basis, this type of coil can get clogged and the air flow reduced to a point that it cannot be opened without going to extraordinary measures.

The simple solution is to clean the coils on a regular basis. A proactive approach to maintaining cooling coils is money well spent.

Next...Microbial growth in cooling coils. Is that something to worry about?"